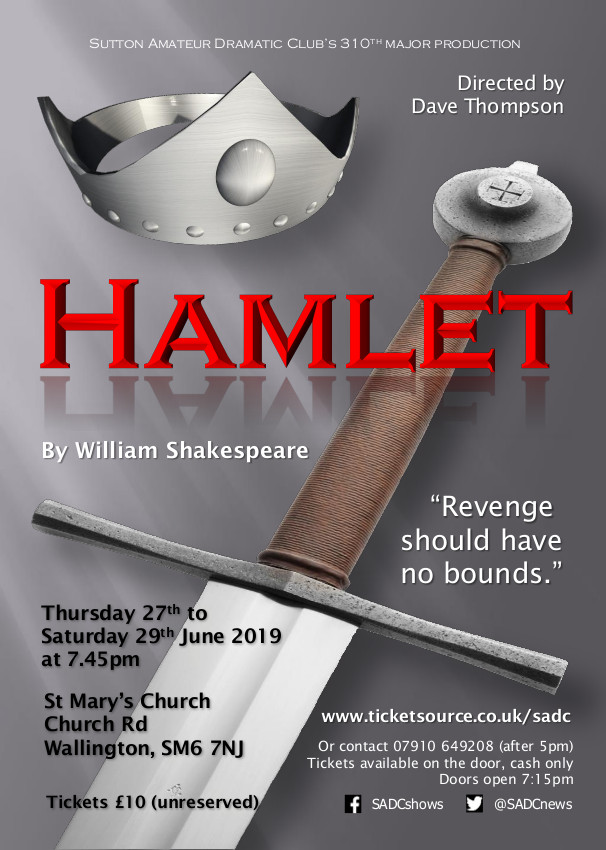 I feel a jewel has been dropped in my lap: to direct the most famous play in the world at one of the finest churches I know. It is quite a responsibility but I am treading the path already ventured upon by the directors of MURDER IN THE CATHEDRAL and MACBETH. St Mary’s presents a worthy palatial backdrop for this eternally visited play and I write this before the auditions and whilst working out the moves for actors by screen, altar, pulpit and aisle! Although St Mary’s cannot be said to have a conventional stage, it does afford the theatrical producer a wide range of options for entrances and exits, for scenes to switch from one part of the venue to another; and despite a lingering June sun, the semblance of a kind of tragic gloom may be glimpsed upstage at the high altar. Well, I’m hoping for cloudy evenings anyway!

The play will be in modern dress — following the example set by last year’s Scottish play — and it will take place in a fictitious 21st Century Denmark, somewhat prone to sudden changes in its monarchical figures and subsequent appearances of a once-powerful King, a mere Ghost of his former self, visiting a troubled Crown Prince.

Shakespearian purists may be horrified less by a preternatural figure than by the occasional sighting of a mobile phone and a battery-operated torch or two. The audience will have little trouble in imagining a court, but perhaps more so in picturing an indoor graveyard (I shan’t be tempted to lead the audience out of the South door and into a real one!) The play has been abridged to an acceptable length and will, I promise, provide a fresh look at the complexities of this – how shall I term it? – timeless, tragic, ‘problem’ thriller!