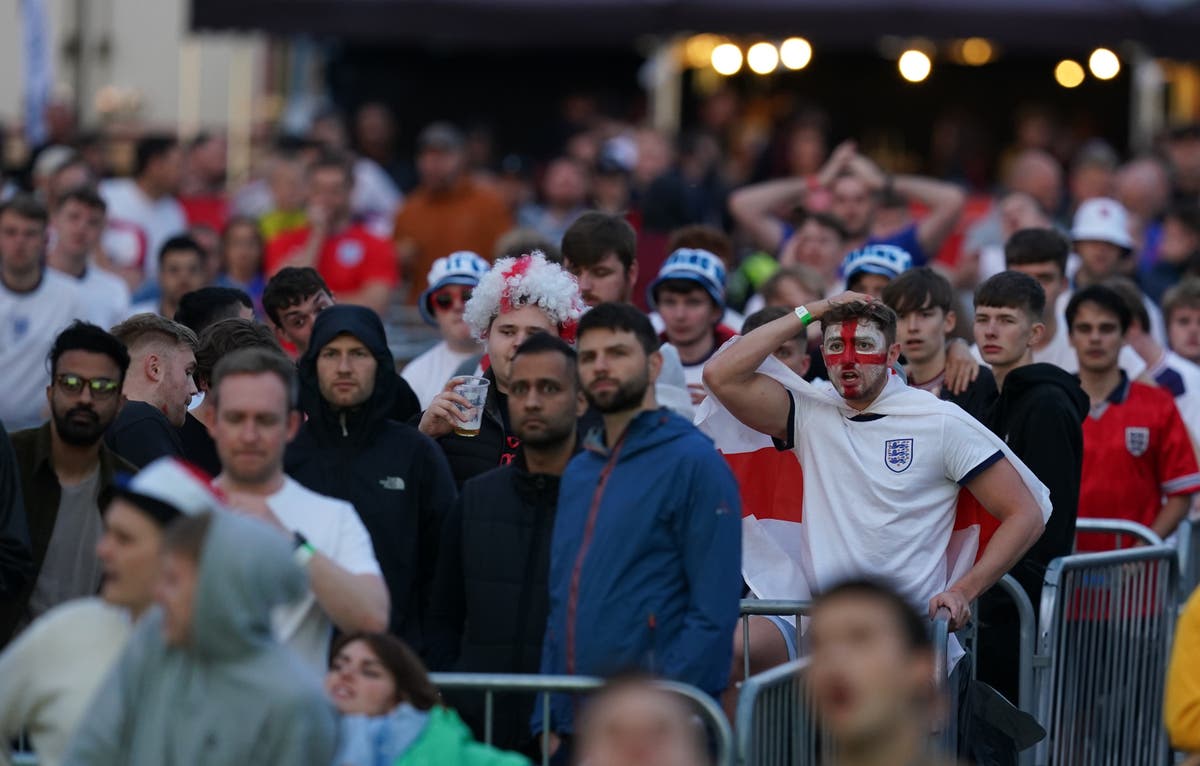 The two teams could not be separated in normal time, after a thunderbolt free-kick from Denmark’s Mikkel Damsgaard and an own goal from Danish defender Simon Kjaer 10 minutes later sent the teams in level at 1-1.

England fans will be desperate to avoid defeat at the semi-final stage, having done so at both World Cup 2018, and Euro 96.

If neither team manages a winner, the tie will go to penalties.

One supporter, Leon Archer, 34, from Clapham, south London, said from a fan zone at Trafalgar Square: “Despite the chances they’ve had, I still believe.

“I just hope there’s no penalties, my heart won’t be able to take it.”

English professional footballer Adebayo Akinfenwa said he was not worried about “the old taboo” of a penalty shootout.

“I’m confident about the semi-final but I don’t want to overthink it,” the Wycombe Wanderers striker told the PA news agency from BOXPARK in Croydon.

Asked about his concern over penalties, he said: “It’s a new generation and I don’t think they have the old taboo on their shoulders.

“I think they’re young, they’re fearless, and they’ll see out the job.

Supporter Paul Richards, 56, who was watching the game at Trafalgar Square said: “I hate this, I just want to hug someone, penalties are the worst.

“I really want to see a goal because extra time will send me over the edge – I just want the boys to get over the line.

“I’m dreading penalties, I’d rather have my teeth pulled out.”

It was a game of contrasting emotions for supporters.

The majority of the 60,000 fans inside Wembley – who include the Duke of Cambridge, the Football Association’s president, and Prime Minister Boris Johnson – erupted as Sterling helped bundle the ball home from close range on 39 minutes.

Supporters in London’s Trafalgar Square were sent into raptures as England equalised, with those in the fan zone roaring loudly, jumping on to the tables and throwing their beers in the air.

They began chanting “Come on England” and “It’s coming home”.

Earlier, they had been left silent by the Danish opener – the first goal England conceded in the tournament -and home supporters could be heard swearing and booing after the ball hit the net.

James Little, 19, a student from Sutton, south London, said: “I’m gobsmacked to be honest, we haven’t conceded in this tournament and I feel like the way we play means we need to score first.

“It’s a long way back from here, I hope the semi-final curse doesn’t strike again – this is the best chance we have to win.

“It’s a wonder goal though isn’t it? How could (goalkeeper Jordan) Pickford save that?”

England responded with an equaliser within 10 minutes, sending Three Lions fans into ecstasy.

One fan, Carl Afinwayo, 23, from Croydon, south London, told the PA news agency: “Oh my word, it’s insane, we needed that- we needed to equalise.

“Sterling has had a great tournament as well, he should be knighted.”

England were installed as clear favourites among bookmakers to beat Denmark, having progressed through the tournament without conceding a goal.

Ian Turnbull, 34, a cable joiner from near Hartlepool, said: “We are going through to the final and we are going to win because it’s coming home.”

But the Danes emerged from heartbreak in their opening match defeat to Finland – when talisman Christian Eriksen collapsed on the pitch – to make it into the last four.

Should England win, it will be the first time the men’s team has made it to a major final since the 1966 World Cup, which they won.

Italy await the winners in the final at Wembley.